From Columbine and Virginia Tech to the more recent Charleston and San Bernardino attacks, mass shootings are becoming more and more common in the United States. They’re at the forefront of our minds more often than not, and we all want to know how to stay safe if we find ourselves in an active shooter situation. We’ve decided to narrow that topic down a bit, keep it in our wheelhouse, and ask the question:

Will a commercial door protect you from an active shooter?

When it comes to using a commercial door in an active shooter situation, it’s important to understand the difference between concealment and cover. Shooting Illustrated makes the difference clear: “Cover protects you; concealment hides you.” All doors could help you hide from a shooter, but not all doors will shield you from a bullet.

This article is intended to be an examination of the effectiveness of commercial doors against bullets, not a guide to surviving a shooting. In any active shooter situation, you should run away, if at all possible. ABC News provides a great action plan that you should follow if you find yourself faced with an active shooter.

However, if you are forced to use a commercial door either as cover or concealment, will it protect you from bullets?

Glass: Upon impact from a bullet, glass doors will shatter, potentially causing additional harm to those nearby. This may seem obvious, but do not use glass doors as either concealment or cover, and stay away from them if at all possible.

The exception to this would be bulletproof glass, which isn’t really glass at all. “Bulletproof glass” is typically made of one of the following materials: acrylic (hard, clear plastic), polycarbonate (a versatile, soft plastic), or glass-clad polycarbonate (polycarbonate sandwiched between sheets of glass). This material is designed to protect you from bullets and could certainly be a viable option in a mass shooting.

However, the vast majority of glass doors are not bulletproof, so it’s best to stay away in any shooter situation.

Wood: This really depends on the thickness of the wood. Bullets, especially from high-powered rifles and machine guns, could easily travel through most wooden doors. When a bullet hits wood, it causes splintering, which can slow down, but not stop it.

Both bullets blew straight through the wood, splintering it in the process. The benefit of this splintering, however, is that the bullet can be drastically slowed down, depending again on the type of gun/bullet and the thickness of the wood. While this wouldn’t prevent you from being hit by a bullet, it could decrease the harm that the bullet causes.

However, perhaps wooden doors are best used as concealment, rather than cover.

Metal: This really depends on both the quality and thickness of the metal. For example, a typical solid metal exterior house door provides little to no protection against bullets. The ballistics test in the Youtube video below shows how easily a handgun bullet can penetrate a standard house door:

Steel doors need to be of at least medium-quality metal and ¼ inch thick to potentially stop a bullet. When you think of the steel armor used in the military, in armored vehicles, etc. they really vary in both thickness and weight. Bulldog Direct is a supplier of steel armor plate and various other bullet-resistant and bulletproof materials. The chart below does a great job outlining the effectiveness of steel thickness against a variety of gun and bullet types:

So steel is your best option when it comes to protection from commercial doors. However, even strong steel doors can eventually fail if hit over and over again in the same location. This makes them bullet resistant, rather than bullet proof.

There are a huge variety of firearms out there, but the political website, Mother Jones, broke down the types of weapons used in mass shootings between 1982 and 2012. The findings are below: 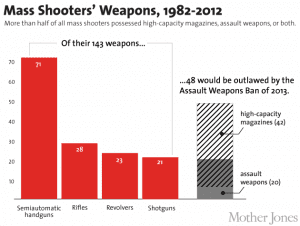 The types of guns in the graph above vary in power and, thus, their effectiveness against commercial doors. Semiautomatic handguns are, by far, the most commonly used weapons in mass shootings. A semiautomatic weapon fires a single shot with every pull of the trigger. They’re easy to conceal in a bag, and are often used for concealed carry. These can vary in strength depending on their cartridge size (see below for a comparison) and velocity.

Rifles are generally more powerful than handguns, as they bring more velocity to the table. However, they’re also bulkier and are intended more for accuracy then speed. Due to their increase in power and strength, rifles are typically more effective against a commercial door than handguns.

The Box of Truth has some excellent videos testing a variety of guns against types of materials. Check these out if you’d like more information about the power of a specific gun.

When it really comes down to it, though, the power of a handgun depends on both the velocity of the shot (barrel size) and the caliber of the bullet. Below are some of the more common bullet types, and a comparison of their power:

.22: These are the most common smaller bullet and are also the least powerful. They’re light and tiny, which makes them easy to transport, but don’t really pack much of a punch. While they might penetrate glass or thin wood, they would most likely be ineffective against a thick wood or metal door.

9mm: These are used in a lot of compact concealed carry weapons, and are a personal favorite of many firearm enthusiasts. The 9mm definitely has some power behind it, and will most likely shoot right through glass and wood. A solid steel door should hold its own against a 9mm, however.

.44 Magnum: Clint Eastwood’s bullet of choice, the powerful .44 Magnum packs a major punch. It has a lot of powder behind it, and will shoot through most materials.

Once again, this isn’t an exact science. The effectiveness of a commercial door against an active shooter depends on a variety of factors working together.

This may seem obvious, but distance is also a determining factor in the effectiveness that a bullet has in penetrating a commercial door. The closer a shooter is to the door, the higher the chance that a bullet will penetrate the material. Again, this goes back to the type of gun as well; different guns have different ranges. So one type of gun might be more powerful at a longer distance than another.

Another interesting thing to look at is the potential for a bullet to ricochet when it hits a steel door. Steel targets have minimum shooting distances; if a shooter is within a certain number of feet of the target, there is a greater chance that the bullet will ricochet and potentially hurt the shooter himself. Therefore, this is an added benefit of using steel commercial doors as concealment or cover.

So does a commercial door provide good cover in an active shooter situation? Well, it depends on a lot of different factors. But in many situations, commercial doors offer good concealment, but not good cover. It’s much better to be safe than sorry, and, if available, use materials that have a higher chance of stopping a bullet.

So what is the best cover?

A concrete wall (like in a parking garage), a refrigerator, a stove, a water heater full of water, bricks, and a handful of other things make good cover. USA Firearm Training provides a great list of things that can and cannot fully stop a bullet.

One of your best bets is finding a body of water. When it comes to stopping bullets, water acts very similarly to concrete. In one of their myth-debunking episodes, Discovery Channel’s show, Mythbusters, rounds from various calibers of firearms were shot into a pool, and none were able to travel more than 6 inches. So if there’s a pool in your building, hiding underwater could make for good last-resort protection.

Again, the best thing to do in an active shooter situation is to run, if at all possible. Your first instinct might be to panic and freeze. Don’t! Try to keep a clear head and get out of the building.
If you’re unable to escape, hide. The majority of the commercial doors listed above are great options for concealment. Separate yourself from the shooter; turn the lights off in whatever room you’re in; and bar the door. Silence your cell phone; call 9-1-1; and whisper to them what’s going on.

Finally, if you have no other options, fight. Everything around you can be used as a weapon. The pen in your pocket - the coffee maker in the kitchen, a fire extinguisher - and engage the mob mentality. Distractions coming from all directions can buy you time until the police arrive.

Whatever you do, just make sure you don’t freeze and panic. Preparing yourself for possible active shooter situations can help you keep a level head and stay safe.