Parts of a Door

Sometimes door terminology gets confusing. If terms like “stile,” and “astragal” are unfamiliar to you, then this guide should serve as the perfect quick introduction.

Most modern doors contain various types of “cores” which consist of a material that may insulate or reinforce the frame. This could consist of a resin-treated honeycomb lattice, polystyrene, polyurethane, mineral or steel stiffened core. For doors that may require additional reinforcement, like exterior hollow metal doors, stiffeners are added to increase durability.

Typically a wood door contains a core made of wood fibers bonded by resin. Other core types include staved lumber or mineral. These cores are designed to be insular, have the potential for various fire ratings, and with the exception of staved wood cores, light weight.

In door-speak, the “rails” are the horizontal structural frame pieces towards the top and bottom of the door above and below the core

The word “stile” refers originally to a passage designed to provide access through a boundary, traditionally in the form of a narrow gap or stepped structure made to be convoluted enough to stop livestock from climbing through while remaining passable for humans. While commercial door stiles’ effectiveness at impeding animals is more or less limited to bison, the concept of a passageway designed for people remains. 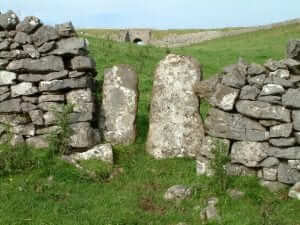 This example of a stile allows humans to squeeze through while still serving as an effective barrier for livestock. Image courtesy of Mike Fowkes.

In modern commercial doors, “stile” refers to the vertical pieces of the door’s frame that surround the sides of the core.

A vertical rod or tube that allows double doors to latch together. Typically found on exterior doors. Mullions are often removable to allow large objects to be moved through the double doors without being blocked.

Alternatively, double doors can use surface or concealed vertical rods to allow double doors to latch together when closed without a mullion.

The astragal is a vertical moulding in the form of a thin strip of metal that screens out light and weather in the gap between a pair of double doors. It also can also add to the door’s ability to block smoke and flames in the event of a fire.

The exit device usually comes in the form of a horizontal bar that unlatches the doors. Typically used on emergency exits, hence the nickname “panic bars.”

The strip of metal below the door that helps create a seal and serves as a place for the bottom of the door to set.

The sill is a curved piece of metal that sits above the door and prevents water from dripping down onto it.

Together with the sweep, it helps to seal the elements out.

The sweep is the strip of plastic or rubber that fits along the bottom of the door and helps to weatherproof it as well as keeping tiny, uninvited visitors from crawling inside.

The weatherstrip is a vertically aligned strip of foam or rubber that helps seal out temperature and moisture from weather.

A recess in the door on a minimum of 3 sides of the hardware item closely surrounding the contour of the item allowing its faceplate to finish flush with the door surface. Mortise can also refer to a type of lock that is recessed within the mortise cutout in door.

You should be familiar with this one. What you may not have known is that hinges are sometimes referred to as “hardware” as they fall under that category of door component.

The strike is the metal fastening on the frame that the lock bolt latches into.

The vertical elements of the frame. One side is connected by hinges to the door and the other connects to the strike.